Just got back from a little outing.... my lunch break probably a little over time;)

Got to the outskirts of the AP, watched it unfold with great lightning arcing as it intensified. I could see as it passed to the se that a RFB started to have some fantastic cg's, whooo , if only it was dark time.... would be sharing some pics with ya.

On the rear anvil some great mammatus, i got abuse from a truck driver because i parked in his UNMARKED pull over...seriously, i told him to get creative and invent a parking sign that specifies that it was park.

Have to head out to Melton for a bit, hope to see some after dark action tonight.

Dammit, I missed it all. Did anyone take any photos? When I came home, my brother showed me that huge black spot on the BOM radar.

Oh and it looks like this front brought us a lot of convection by the looks of all of the lightning tracked on the radar.

Came out of a building in the CBD to hear lots of thunder, some rain and saw quite a few CC's. Thunder was pretty decent too. Don't think there was much rain, but everything is quite wet. Been too busy to be looking at all the weather related stuff, so it was a nice surprise.

It was warm today wasn't it? I don't want winter to disappear too fast, we all know how brutal our summers are..

That line of showers/storms is about 150km long, pretty impressive.

Yea is getting another burst from follow up showers - nice!

cant wait to see those pics Greg. Heres hoping something comes through around dark as well.

Floyd that line of showers and storms much longer than that. Goes from the Bass straight to the NSW-QLD border! Thats impressive!

Driving up to the farm after work - can't wait to see how much is in the gauge.

I had ~6mm at work and gale force outflow from the storm with a little bit of hail mixed through. Can't find evidence of hail at home, ie dirt spots etc here but 4.6mm at home. I don't know how the other AWS gauges had so much less. I can see though that someone had 5mm in Toorak so very spotty falls. It was complete whiteout back at work for a few minutes, could see the cloud burst right over Glen Waverly, lost sight of the Police Academy and knew it was time to get inside!!

Couple of close CGs but no flangs at work, ripper CGs to the north as it was coming in, probably the ones that took out some of the train lines in Hurstbridge earlier.

Couple of showers and thunderstorms to continue til about 7pm but then clearing.

A very nice surpise here, but not for all in terms of rainfall.

glad everyone got a good storm. But i watched to build iover my head and could see it moving east and building intensity so close for me but not to be

Here's a photo of the band looking SW from the Devils Elbow. Not that photogenic, but you get the picture. Rain/hail bands were dancing across the suburbs but pretty narrow as you could see through most of them 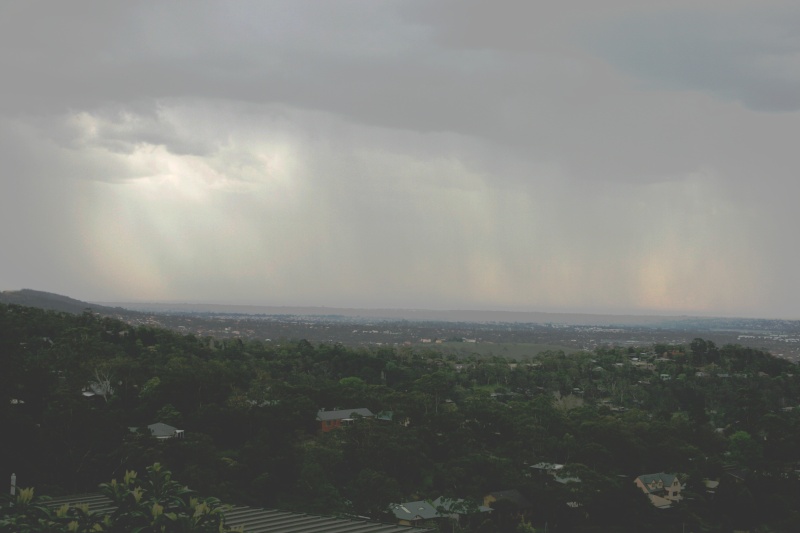 3mm here, would have come in quick time. Too bad it was all moving so fast.

That front must have gone through fast - I went into a meeting in Campbellfield with very dark skies to the west at 2:45, and came out to wet ground and broken cloud at 3:30

I have to get people to be more flexible with meeting start and end times!!!

Got very dark at work all of a sudden, moved in from the north, caught one flang out of the window. Saw the radar, that black over the bay looked intense, but didnt have visual. Went home through where it rained the most down the bay and no damage of any sort to report. Looks pretty unstable outside atm, great spring weather, ahh the good old days.

First storm of the season on day three, not bad!

nice line about to hit us. Yarra radar.

What a fun Day! Got Flanged crossing between buildings

And then enjoyed the torrential rain and booming thunder! Then saw some nice mammatus and a couple of rainbows on my walk home. What a way to start spring! I swear the BOM weather calendar can tell the future!

Nice to see you guys enjoying the stormy weather, when I was watching it on the radar I thought of you guys living in those areas.

As for my end, just some showers and wind today, though there were some heavy drops in those showers.

In any case for those you receiving storms, pop some popcorn and enjoy the show.

Wheres that kid thats on work experience at the BOM! He sure got lucky today!

Enjoying his time I am sure our Jake is!! He will certainly have lots to talk about when he returns - going to be a superstar forecaster when he is in the job full time. Lots to offer... makes me feel old and whithered

Nice to hear DE. Still showers tonight and indeed tomorrow and should see some hail and thunder approach during tomorrow as the low crosses close by.

EC indicates with US in the latest runs that the low is somewhat back closer to the coast next week so this could indeed increase rainfall.. Nothing is a fizzer at the moment, it just seems to work out on it's own!!!

AUSSKY wrote:A short, sharp shower with what sounded like a bit of hail in it about 3am this morning but didn't register......in Abbotsford atm, but suspect I may be thrown out and told to go home earlier than usual, so would be happy with convection (anywhere but Abbotsford )

and I get what?? A storm fair over the top of the building!! Said to the NSW Manager on the way back from lunch with just AcCas about...'there'll be storm this afternoon'......yeah, yeah came the reply...and "Bang!!" 1.5 hours later while we were just ending the Managers' meeting..so we sprinted across to the coffee shop and watched it from there - nice base features....I'm delighted that my instinct still works!!!

Tooks some shots on the way home (got told to go home about 3.30pm....will post soon, and then puddled around in Tylden taking photos of the fast flowing Little Coliban River...ok Karl - you were right - the adrenaline worked!!!

You missed a ripper out your way Jane, got me when I was driving between Trentham and Woodend lovely bit of rain and hail, of course if you are driving an open top car it is not that great although the smell of fresh rain was just outstanding..

Saw the storm while at work in St Kilda Road, a couple of good cg's and the thunder could be heard inside the buliding. At home in cranny just 0.4mm's though. Slow start to the month rainfall wise here with less than 2mm's so far.

How interesting that all I noticed was dark clouds, no lightning, no thunder and no rain. Only about 5 drops that I felt on me but evaporated before it reached the ground! Typical summer storm!

Just got back to the farm and measured 12mm in the gauge! Happy with that. Tanks are over flowing!

I see the Herald Sun pumping up the storm. Described as "vicious" and producing heavy rain, including up to a massive 1mm collected in 10 minutes at Mentone. Big bloody deal......

Some images from this avo. PS, great to hear you got your rain Scott;)

The back end of the line, had a couple positive arcs popping out, i was thinking that just maybe a plane might be in the firing line. 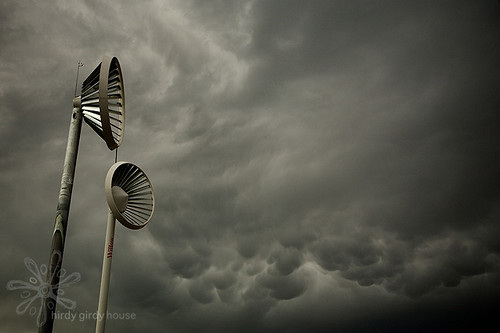 Decaying line east of the city at sunset.

I got this on the way home this afternoon..