Back from Launceston and have checked the gauge to find 24mm

Wasn't expecting that much! The drive to the airport yesterday (left here around 1.30pm) was mayhem - saw three CG's and was getting slammed on the freeway by all sorts of debris, mostly leaves flying horizontally at me which made for some interesting driving. The traffic was a shambles and only just made it in time to catch a 5pm flight, ridiculous.

Today the trip home was pretty hairy, lots of turbulence, in fact probably the most turbulent flight I've been on, even the hosties were falling into vacant seats to buckle up at times as it was impossible to move around the cabin.

I'm surprised at how warm it still is here, Tassie wasn't particularly cold either but they haven't had any of the rain that we seem to have had here in Melbourne. Only very light drizzle there today but it cleared by this afternoon. It's amazing how green it is there, compared to Victoria, the contrast is stark.

I'm loving this rain, it's so heavy and lasting for ages. I couldn't go out tonight but am loving staying home atm. I hope this keeps up.

Better start putting your floaties on

Have been in and out of heavy rain up here, but on the edge somewhat - had 12mm (make that 13mm) so far since ~6pm and coming down thick ATM. Event total will soon pass 20mm (so a handy drop).

BTW latest obs suggest flash flooding will soon be a problem. Up to 55mm at Toolern Vale, and 44mm at Bullengarook. Will be a lot of water going into the Werribee river fast.... and just out.

A low pressure system will move from inland South Australia southeastwards through Victoria in Sunday morning.

Local falls of rain between 20 and 42mm have occurred over the past 3 hours in parts of the Central and North Central district.

The State Emergency Service advises that people should:

* Don't drive, ride or walk through flood water.
* Keep clear of creeks and storm drains.
* For emergency help in floods and storms, ring your local SES Unit on 132 500.

DP 17.4 RH 96% what more could you ask for. An amazing soaking before any possible lightning, still pouring here with no sign of it letting up and for the cherry on top, the convergence line is getting wider too

36mm here now with the heaviest rain I have seen since Feb 2005. Flash flooding through the streets. I went down the street which slopes, in thongs and my umbrella and there is a lake at the end of the street and is getting bigger by the second. People are walking out the front of they're lakeside properties hoping the rain will ease. Buckets out in the sunroom here, front yard is a lake and thumping down still!!

I would think another 1mm has fallen since typing. I cannot beleive this!!!

Seeing a classic tilt now with rain coming out of the north more than west with the low moving southeast. This should see most of Melbourne pickup rainfall being experienced in the eastern side but duration may be less than here given we are under the focal point.

Lily I think it is amazing the difference in these systems. You will catch up soon I hope.

Not much here in Lilydale yet but happy to see lot of other places are getting a heap.

Flash and a crackle outside here. Steady rain has been passing through for the last few hours.

Yeah, crazy to think places as close as a 15 minute drive from here have had 40-60mm already.

Back to drizzly light rain here. Have had a few brief periods of decent rain, nothing very heavy though. haven't checked the gauge but it would only be a few mm. This is truly frustrating, I'm only 5km awayf from the edge of that band. I guess I'll have to look to the main area of rain way up in the NW to come down overnight for my next chance.

Rain easing now, will have a 15-30min break before it starts up again. Haven't checked the gauge, but I'll say 20mm. Doors are open, allowing a very brisk zephyr to enter and fully remove the remaining heat.

Nice view of the low on the 256km Ceduna radar.

Confirming a lightning strike out your way Bob? Probably can't see it here past the rainfall but it has eased here somewhat the past few minutes!!!

Will run outside to take another reading!!!

all over now for us, looks like we hit the dry patch in the radar, DBs right, 15-20min south and would have lovely rain now, nothing at all.

BRILLIANT!!!! What a sound, with Soooooo much moisture on it's way, i think GFS might have been modest on this one, suggesting only 10-25mm..... i wonder if Melb will crack that figure open with a sledge hammer. Will be interesting to see if the sparks hold, but i doubt it, just more rain.

Is that a gap forming between Melton and Melbourne Airport?

Rain band has just been grazing past here, so not as much as some but 13mm's so far and more to come.

yeah looks like it Dez....it's drizzling here now rather than raining....mind you with 18.2mm and still rising....I am not complaining!!!

droughtbreaker wrote:Yeah, crazy to think places as close as a 15 minute drive from here have had 40-60mm already.

Back to drizzly light rain here. Have had a few brief periods of decent rain, nothing very heavy though. haven't checked the gauge but it would only be a few mm. This is truly frustrating, I'm only 5km awayf from the edge of that band. I guess I'll have to look to the main area of rain way up in the NW to come down overnight for my next chance.

Just checked my gauge and we have done better than I thought....4mm, well maybe we will get something overnight

Worth remembering that most places are missing out on this. If you look at the Doppler rainfall loop you can see just how isolated these really heavy falls are. Unless we get widespread rain overnight across the state I'm calling this one a flop.

Coming down heavy up here now. Up to 17mm and climbing fast (just past 20mm for the event). Wind obs show really strong convergence between SW and N flow. These convergence bands tend to form quickly and die quickly so anyone's guess what the final totals could be - suspect we have already got local falls neat 80mm in Melbourne's NW suburbs.

Off to bed - hope to wake to 100mm (but will settle for 50mm)... this localised rainfall wasn't picked by the progs so we can look forward to the proper rain later (perhaps).

PS Karl only 80mm to go to our monthly average...

Just lost power for a second in Lilydale! hmmm

23mm here since this morning, roof leaking like a sive.

I reckon it is going to close in from the N for a while, and then looks like we will get thumped by the huge active band moving down from the NW.

I must be dreaming! This is fantastic!!

I'm going by Tony's figures atm as I can't be bothered going outside to check the gauge.

yeah the steady rain is back now....so totals should be going up faster again! BTW I am just going by CS weather website....so I will assume they are accuate!!! 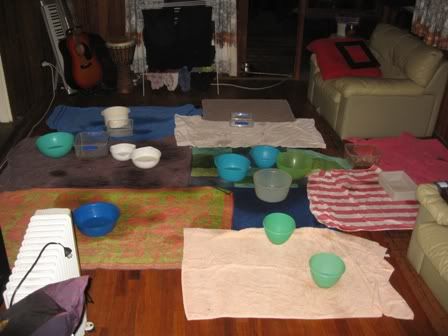