My place was right under that last line. My fingers are crossed that i am not bathing in the lounge room tonight...

Lol. This is not the worst ever at all.

The 2003 storm event was still more significant than today's. Will have to see what the next front brings, but looks like it won't be as intense as the previous.

Connex Website says that almost every line is suspended due to storm damage.

Not the worst event for a wide area, but rain rates in excess of 120mm/hr put it in the severe category, no matter the duration.

A hell of a lot of rain still coming down in NSW, will just depend if it sharpens up over the next 2-3 hours.

Karl Lijnders wrote:Connex Website says that almost every line is suspended due to storm damage.

Was at school during the storm, hopefully the 2nd line is good

Agree not the worst storm, but when my mate calls to say that it was the worst he has seen I would have to agree with him given he spent 5 years in FNQ. Also my home is located under the 'P' in Pakenham on the 64km radar. If you go back thru the radar images you will notice is was Black allbeit for a couple of minutes.

Kids now home safely after being held up in the classroom until the storm past. They report some trees down and a trampoline that has somehow jumped fences and is now leaning sideways up against a tree on the nature strip. God knows where that came from.

James wrote:...and whilst the weather can vary in intensity depending on the suburbs etc its actually very normal to get weather like this in summer at least once....

Those of us out in the Western Suburbs don't experience these events very often James so I think some of us should be excused for getting little excited when they do actually happen.

I'm not expecting any more heavy stuff out this way, maybe some more light/moderate stuff.

Hey Bellarine, is that taken atop of Centro Building @ Box Hill?

Indeed it is :-) A good all round spot if there ever was if I need a shot in a hurry

Ive just come back from picking up my daughter at school in Box Hill North - school has suffered a lot of ripped up trees and damage to equipment - no kids hurt though.

Not too excited with the 2nd line

UPDATE 3.27pm: WILD weather has shut down several of Melbourne's train lines and caused flights at the airport to be grounded.

Power was reportedly lost in parts of the CBD as the storm passed across the city shortly after 2pm.

Up to 18mm of rain fell in Melbourne's northeastern suburbs, which were hardest hit, with the storm bringing thunder and lightning, lashings of rain and large hail stones.

Train commuters on all lines face delays of up to 30 minutes as Connex works to fix the faults before the afternoon peak.

Connex spokeswoman Lanie Harris said lightning had struck a train in Sunshine, but there were no reports of any injuries, while lightning had also caused signal faults and trees had fallen across train tracks.

The public transport operator, which hands over the reins to Melbourne's train network to new operator M-Train on Monday, is reporting delays in both directions on all lines.

Buses are replacing trains on the Belgrave line between Box Hill and Ringwood with Connex advising passengers to seek other modes of transport.

The Alamein has also been suspended between Camberwell and Alamein.

Flights out of Melbourne Airport were temporarily grounded because of the risks posed by lightning.

"While the storm passes there's effectively nothing moving, nothing taking off," an airport spokesman said.

He said the airport had not had to divert any incoming flights at this stage.

Normal departure schedules had resumed by just after 3pm.

Weather bureau senior forecaster Scott Williams said a severe thunderstorm warning was also current for the east of the state, including parts of Melbourne.

He said the storm was widespread across the state.

"It's cut a very wide swath through central Victoria right up to the Murray," he said.

"Shepparton copped a big thunderstorm, we expect there will be some flash flooding."

Mr Williams said the wet weather was expected to stretch across the weekend.

"It will clear up tonight ... then another front coming across from WA will bring another band of rain overnight and on Friday," he said.

"There'll be a very small respite during the daylight hours of Friday before heavy rain and thunder right over Saturday and most of Sunday."

Mr Williams said the humidity would also stay around until Sunday when a cold front was expected.

Cheers mate, gives me another spot to take photos from

.
I park @ Box Hill station and then home to Doncaster East. Will be an interesting drive home.

The first line sucked a hell of a lot of energy out of the atmosphere, with temps struggling to get back over 23. Hoping for more especially out west as it is only 3pm normal time. Still a couple of hours to go, but need some sort of clearance!!!

Holy Hell you guys in Melbourne are getting the full force of it, do take care if you're out and about.

My area has only begun to see some slight clearance of cloud cover but SA is about to cop it, about to have some small rain cells come my way.

I like the look of the new activity developing in sw nsw, should filter down during the evening..... we'll be right team, more to come:)

Will be fun getting home, have to see what the outcome is..delays at sunshine as well on a lighter note will be keen to see the rain gauge!

One of the two tracks is now clear of the fallen tree near Woodend.
Services are expected to start to return to normal over the next hour, although delays of about 20 minutes to most services are currently being experienced.
The 13:38 Bendigo to Southern Cross train was terminated at Kyneton. Passengers from this service are now joining the 14:28 Bendigo to Southern Cross train and are expected in Melbourne at about 16:45.
The 13:15 Southern Cross to Bendigo train will be delayed by about 20 minutes (currently being held at Gisborne awaiting the tree clearance).

Starting to Fire up over adelaide, renmark, mildura areas....

Yes that stuff up north has my attention now. SHould start to wrap around and drift slowly further south. Im hoping for a decent light shot tonight, unlike this morning CC fest...

Here we go - a couple of photos of the oncoming front from our 3-story carpark at work (Notting Hill), just before a ran for cover. 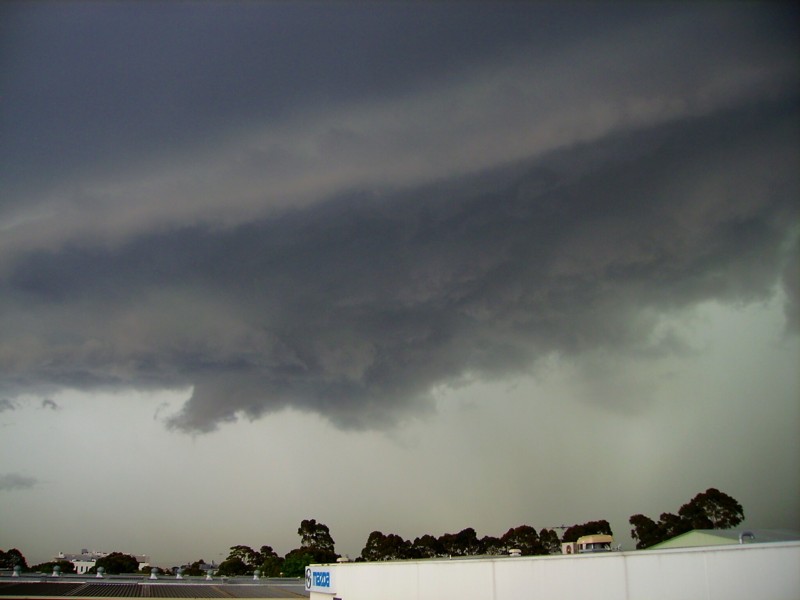 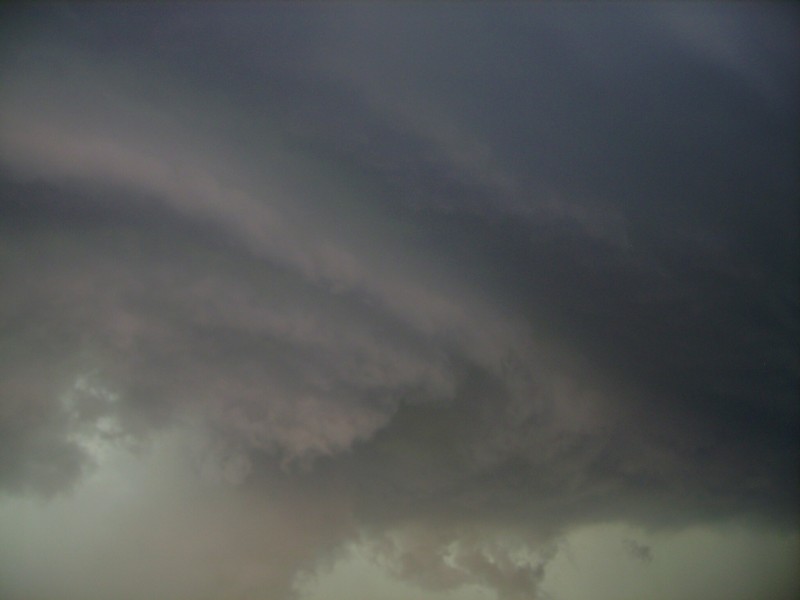 I know I should have brought my own camera in today, but at least someone at work had a digital point-and-shoot

FLOOD WATCH FOR GREATER MELBOURNE (WERRIBEE, MARIBYRNONG, YARRA, DANDENONG AND BUNYIP CATCHMENTS)
Issued at 4:43 PM on Thursday the 26th of November 2009
by the Bureau of Meteorology, Victorian Regional Office

Rainfall totals for the 24 hour period to 9am Thursday over the Melbourne Metropolitan catchments have been up to 26 mm. Further totals of up to 21 mm
have been recorded across the metro catchments since 9am Thursday.

Scattered showers tending to areas of rain are forecast for the rest of Thursday
into Friday morning with general rainfall totals up to 30mm. Scattered thunderstorms mainly this afternoon and evening with local heavy falls up to
50mm are possible. Further rain is expected on Friday evening.

The Melbourne metropolitan catchments are wet as a result of rainfall over the
previous weekend. The rainfall to date has led to some stream rises in the Upper Yarra and Bunyip catchments. The forecast rainfall may cause significant stream rises with the possibility of areas of minor flooding developing during Friday in the Yarra River, Dandenong Creek at Werribee catchments.

The Bureau of Meteorology in conjunction with Melbourne Water are continuing to monitor the situation and will issue catchment specific warnings as required.

In the interests of community safety the SES suggests following precautions:
* Don't walk, ride or drive through floodwater,
* Don't allow children to play in floodwater,
* Stay away from waterways and stormwater drains, and
* Keep well clear of fallen power lines

Contact the SES on 132 500, if emergency assistance is required.
Current Road and Traffic Information can be obtained from the VicRoads website:
http://www.vicroads.vic.gov.au/trafficalerts

Weather Forecast:
Weather Situation
An upper level trough over northwestern Victoria will cross the State tonight. A
low pressure system will move from the Bight towards southwest Victoria late
Friday. An associated trough will reach western Victoria Friday afternoon,
clearing eastern Victoria early Saturday. The low will intensify but will remain
near southwest Victoria during Saturday then will weaken on Sunday as it moves
eastwards, reaching the Tasman Sea Sunday afternoon. On Monday a high will move
from the Bight and pass to the south of Tasmania later.

Forecast for the rest of Thursday
Cloudy. Areas of rain and scattered thunderstorms, possibly severe with flash
flooding.

Forecast for Friday
Cloudy. Rain, easing to isolated showers during the morning. Isolated
thunderstorms during the evening.

welcome kennacan, a Warrandyte perspective will add to our over-all coverage nicely! Just 2.5 mm up here in Cohuna during the day, most of which fell in 2 minutes when the storm went through. Clearing up now but the next line heading down from the NW should get pretty gnarly by the time it reaches us during the night.

Still a good chance for some more tonight?

Just a quick handful from the end of the southern runway when the line came through around 1:30ish....