Still a few random close ones here but otherwise just light drizzle. Hope some one got some footage

Those rumbles you are hearing, are right over me atm. Massive CG's here too. Most of it's happining on the back side of Mt Dandy atm.

AmaroK wrote:Still a few random close ones here but otherwise just light drizzle. Hope some one got some footage

I got some. Don't know how good as it was on my camera.

Windyrob, that second shot is EPIC!!!!

Absolutely sensational pics Windyrob!! The second one nails it!

some awsome shots there windyrob - should have gone down to the end of head street where most of the stormwater drains empty out its was insane the amout of water comming out of it - the current must have been a good km out to sea. Will remember the camera next time!

Bubs stayed alseep throught the whole thing so a good result there!

had some good rain here, mixed with hail for a short while, lots of thunder, lightning....but all sounded very far away....except for one that was fairly close and startled me, and my dog ran to the door all savage protecting me from the thunder!

still slight rumbling in the distance, will be interesting to see if this continues throughout the night

This is poor work by the BOM - issued at 12:34am - the main front had passed through by then for most of the bayside suburbs.....there shuold have been one issued at 11:30 2 hrs after the one for geelong was issued...dissapointed

For people in parts of the
South East,
Eastern and
Outer East Local Warning Areas.


Wind gusts to 100 km/hr and localised flash flooding have been reported over Melbourne suburbs tonight.


A more general severe thunderstorm warning is also current for parts of the Central district.


Warnings are also available through TV and Radio broadcasts, the Bureau's website at www.bom.gov.au or call 1300 659 217. The Bureau and State Emergency Service would appreciate warnings being broadcast regularly

Had 36mm here. I cannot beleive how tight the rainfall gradient is. Some suburbs in the Oakleigh area faired the best with near 40-50mm out of it.

Definitely got some backbuilding going on - had a couple of flangs in the last 10 min.

36mm compared to 9mm here. Unbelievable. Got pretty worried as I heard a few hail stones, we have a huge plastic sky light.

still rumbling on, on and off light rain and then an unexpected torrential downpour from nowhere for 3 minutes then nothing again

Amazing isn't it Michelle. Went for over half and hour here.

Edit: That was impressive thunder!!!

39.5mm in last 24 hours. 30mm in less than 1 hour and local BOM gauge showing similiar numbers - wow. Have not see that in this part of the world for a while. Mother nature reminding us whose boss.

Excellent stuff out there Mut

Another storm developed on the back edge re-enforcing heavy rain here briefly.

38mm at Berwick seems the highest I can see here so far.

Thats it im off to bed, What a night, now bring on tomorrow!!!

and boooooom, i thought it was over but more thunder ......dare i go to bed just yet?

Yeah the thunder is lingering but I can only see the odd bolt or two of lightning to follow this with any shower activity.

May be an increase towards 5am but it looks partly cloudy judging by the sky following the rain.

that was worth getting up to see the front window doubling as a water feature, 2 meter wide water feature in the lounge, thankfully all running on the outside, more sleep required.

Well it was leaking through our roof the rain was that hard. Sitting on 130mmhr for a few minutes with hail thrown in will do that.

Still raining here, another clap of thunder to the east.

Looking west, there is another band starting to get organised. Worth watching for further lightning me thinks.

Also the dams getting pounded again with the Thomson getting smashed by similar intensity red/black cores. About 3-4 to train over there. Could well be another 20-50mm there in the coming hour or two.

And just before I head to bed. Great pictures everyone!!! More obviously to come in the next few days.

46mm @ Berwick makes my 37mm look normal!! Cells seems to train over the region between me and there.

Thanks Johnoo for the link

What a exciting afternoon/night, I decided to go for a chase towards Ballarat around 3PM from Dandenong North (it took me 1 hour just to get from my place to Westgate bridge

) Not much was happening around Ballarat when I got there except for some dark clouds to the N/W and sunshine which was a good thing for later. I ended up going to Bendigo as I could see cells building to the NW, after I had maccas at Bendigo it was dark enough to see lightning in the distance so I went in that direction and ended up on Loddon Valley Hwy, halway between Bendigo and Serpentine I went down a gravel road fairly close to this lightning active cell until it started raining I backtracked a few km's and ended up getting these 2 pics until the lightning died off. (there was lots of CG's on the way there but I arrived a bit late) On the way back home it was a fun drive with rain and lots of lighting going off in the distance, constant flashes everywhere like many others reported when I was going through the city and back home. 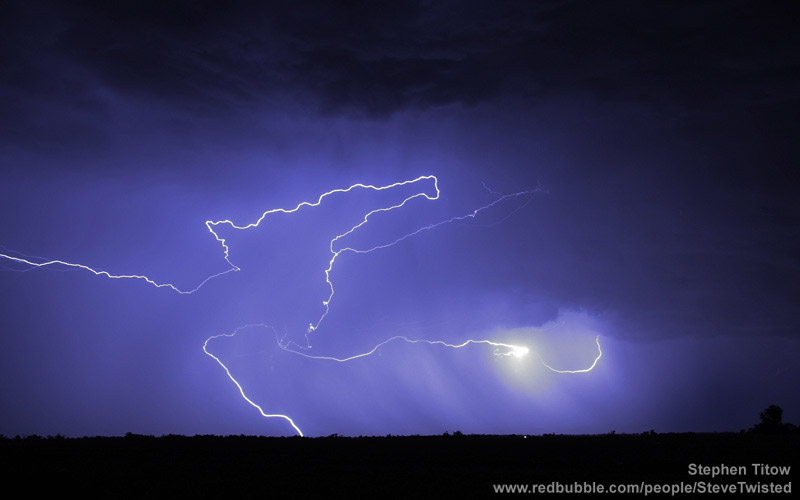 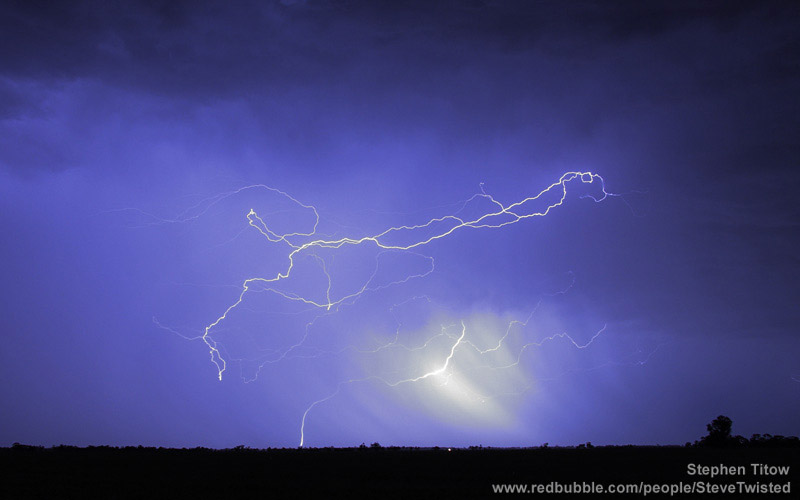 Back From a big chase to the NSW border.

Drove To Echuca after been stuck on Monash for over an hour at 2pm no reason was to much cloud and was AMAZED at the Huge turn the first Storm did after heading SE it then turned NE unreal so played catch up all day.
Was in contact with Greg much of the day he caught a funnel cloud at one stage and got loads of lightening and convection sure he will tell you all much more.
After about an hour in Echuca and watching a dieing storm with some lightning, saw the west pop up so headed to Bendgio, that's when my day turned great and was treated to over 5 hours of non stop lightening, as I rode the trough line all the way home from NSW to Clayton.
The lighting out Bendigo way around 8-9pm was VERY impressive it was all CGs it was unreal and were multiple at times to was great to watch looks like you got the same show to Aus_Twisted impressive wasn't it.
Then after that died went done the Calder and drove though many Heavy cells with Very heavy Rain and lots of Flashes in all directions then from Mount Macedon to Diggers rest amazing light showed stopped at diggers rest for 20 mins to watch the show then headed though the city and down monash just behind the storm.
Was treated to an amazing light show so Many CCs and some ripper CGs almost every second it was constant.
Got back to Clayton water all over the place and set up facing east to watch an amazing show of Lighting for another hour before it all died.

Great day, good 2 days and more tomorrow least it be clear tomorrow and hopefully trough don't move though to fast east and uppers stay a bit on the cooler side.

Welcome to Storm Season LOVE IT

A real roller coaster day. Some positives, some negatives. Started at 2pm as promised, headed up the Hume and then headed towards Bendigo. At this time Rikki was getting the brunt of some ripping cg's from the Donald storm. I eventually got close enough to witness a spectacular daytime display as the storm changed direction to ne. Structure wasn't fantastic, but it was dark, big, and first storm for quite some time on the road worth chasing. I was just north of Shepparton when i spotted the funnel cloud as Dean said. Just wasn't close enough, but tried valiantly to get closer. It formed under a rapidly forming updraught under small clear slot. That was the problem all day, mid level junk prohibiting any real activity....so frustrating. Mods, sorry for this... Robbie Alexandar was closer to the funnel which he posted on WZ (sorry Karl...eeek)

I guess in some ways it spelled foreshadowing of 'chasing ghosts' as John Allen said later in the evening, whom i met up at Shepp just on sunset. We headed north in anticipation of a release of energy that was ready to be tapped into when the secondary trough came through...... only it's big stage act was about 30-40mins of active cells north of the border, and us driving like bat out of hell to get to them, only for the cells to die..... infact, i only got one shot off, that's it! No more. Nudder.

I got so bored of the sporadic nature of the pulse storms that i took photos of windmills.....seriously what a load of tripe

Some great pictures from everyone else though so far and i hope everyone else had a more fruitful bounty of bone spanking images. Off to bed now, i'm knackered.