Well after todays FIZZA looks like the weekend will be windy but little in the way of rain. Gotta wonder what is up with our weather when even the strong systems don't deliver rain anymore 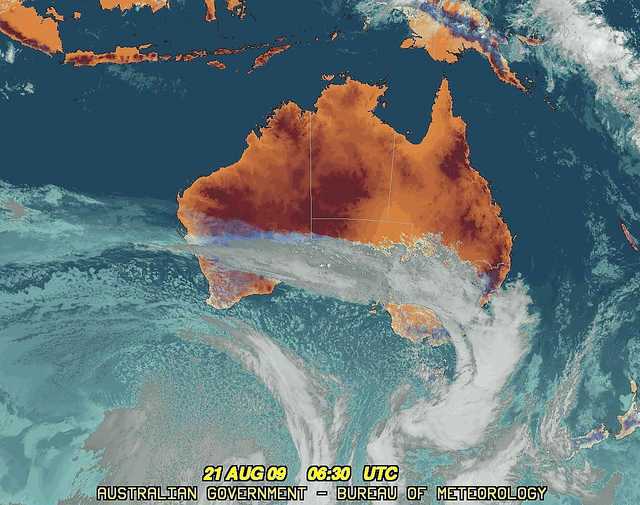 Yeah nice satpic. Hard to believe that such little rain fell from so much cloud.

It didn't really get much chance to connect that cloud into the system by the time it kind of did it was over the Alps hence the good rainfall up there.
I think that cloudband will largely stay North of us for the weekend so don't think we will see anything from it I'm afraid. Tomorrow is looking fairly stable to me I'll be bit suprised if there was convective shower activity about looks preety fine to me.

Was an absolute shocker of a fizzer. But at least the wind was fun. I am glad now I had that 12mm yesterday. Makes me feel a little better.

Looking interesting tomorrow. I am not writing the weekend completely off with so much more is going on than meets the eye.

On a positive some minor flooding warnings out about the NE slopes. The Snowies have also seen some big falls with Perisher in 80mm of rain for the 30 hours to 3pm.

I'm actually a little confused with all the enthusiasm surrounding this weekend. For a few days now the prospects of this weekend have been talked up despite the models having absolutely none of it. Seriously, i reckon we will have to wait until Monday for the activity to increase again with some ripper cold fronts and LWT.

No fizzer here in the end. 10.4mm overnight and this morning at home. I was expecting a bit more but still came away with some decent follow up. 33.4mm now since Sunday. Almost got blown off the street waiting to cross at Spencer street late this afternoon as a brief squally shower came across the city. In fact it was hard to walk in a straight line today such was the wind strength.

Yes that is a good result for the region. I see that there is a forecast for further areas of moderate rain tomorrow into Sunday morning, could see those flood warnings in the Dartmouth region lifted to moderate.

On a side note, I have spent a bit of time over the years in the NE around Dartmouth in these situations and it rains like no tomorrow up there in the township. One of the prettier places in VIC and deserving of rainfall.

I was last at Lake Dartmouth in 1997 when the dam was 100% and they were releasing water down the Mitta Mitta River!!!! Long time ago now!!

Left home at 0800hrs this morning when the rain just started arrived home late afternoon with 19mm in gauge.There was water running around everywhere looking good for the dams.

Seems there was a little bit of lightning action going on in those coldies lingering in the south. Had quite a nice show whilst walking tonight

Only scored about 2mm today and loads of wind

Looks like South Gippsland did last night with 10-20mm but not much else. Winter like temperatures out there this morning with -1C in the Yarra Valley, and 4C up here.

Looks like showers for the next two days will large stay in the far southwest corner, northeast ranges and perhaps a bit coming into the far northwest from the tropical low cloud band.

The system for Monday/Tuesday/Wednesday looks very promising. The air with it is significantly colder and the cold air stays in place for ~72 hours with a sequence of fronts. We really need it as the month is turning into a very dry one for central/eastern and northern areas ATM with rainfall around half average or less in many spots.

I thought it was cold when got off of the train last night at 1am... got down to -3 at the weather station in bendigo and -4 out at trish's... big difference from the mild 7C's the night before!!!

Ah you were spot on John, 0.1mm here should I be happy with that? I think Karl's 1mm is pretty impressive.

No worries Jake, your forecasts and analysis are getting quite professional, you seem to be developing a greater understanding of all things weather.

Sitting here waiting for something to happen, all looks promising and that wind is cold, just hope something develops this arvo. 11mm from the last lot with a total now of 37mm for the event. Not too bad at all and the tanks are totally full.

Thought it was a bit cool, only 10 degrees outside now, might put the fire on.

Nice steady rain has set in up here now, we had a little teaser of a shower a while ago but looks to be setting in a little now. We only had less than a mm for the front yesterday so this jetstream rain is much appreciated for the northern plains. As usual, nothing much showing on radar but.

All falling as snow above 1400m too. So hopefully 10cm overnight at the resorts.

Getting some drizzle here, purely as a result of moist N/NW winds forced over the range.

Yeah I can see some showers about the place. Might be a few more showers as the front passes over the W coast overnight.

Can only expect the winds to get wilder and wilder from this point on!!!

skies are actually clear here at the moment, the stars are very bright!

Bit surprised to see 1.4mm in the gauge this morning from a few showers around 2am. Can't see much today for most - part from the west and northeast ranges. Very different story for tomorrow with the first of a series of strong cold fronts coming up - looks very windy with widespread showers.

nice day outside although it is vry windy still. Is it just me or has this year been windier thn the last few?

I hop m being here deos not bring the place down.