Anthony Violi wrote:Jake, as soon as the upper level low weakened and slid away last night the uppers were always going to warm slightly..

Something to learn everyday I guess!

Yeah OI am learning lots too! But don't know if it's sinking in lol

Got some good convection way over pakenham way and some over Geelong way visible from here. Feels like Qld.

Greg Sorenson wrote:Far our Robbie, sounds like a severe microburst to me. Had a similar experience back over in SA near Loxton, literally 2-5 kms for tree carnage. Which is why it's a good idea to be on the outside of storm observing rather than core punching. Same could be said when i was only a couple kms away from the Karoonda tornado a few years back, i wouldn't have know what hit me in the dark if i had gone a few km's up the road. I guess you can call it luck, but i favor common sense.

Great photos everyone, really fantastic. Today will be primed. I think storms are going to be more structurally spectacular. Cooler air pushing into the humid mass that we have here atm amounts to striated shelf clouds at the front of any storm that develops, like the Caroline Springs storm that came through in march this year: 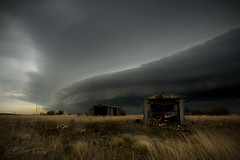 Now if that isnt a prize winning pic with world wide appeal, I dont know what is. Thats the best composed shot ive seen on any weather forum, congrats!

Dont write it off just yet. Melbourne stands a 60/40 chance with 2 further hours of sunlight, it will be supported by a windchange, a seabreeze front ahead could also invigorate it.

Not as clear cut. Hour by hour is the best policy in my opinion.

Looking for 10mm and I will be happy making it a 60mm system for this region!!

Severe thunderstorms are likely to produce damaging winds, very heavy rainfall, flash flooding and large hailstones in the warning area over the next several hours. Locations which may be affected include Mildura, Horsham, Hamilton, Warrnambool, Ballarat and Portland.

Severe thunderstorms are currently affecting eastern South Australia and are expected to move into western Victoria over the next hour or two.

The State Emergency Service advises that people should:
* Keep clear of fallen power lines.
* secure any loose objects in the vicinity of your home.
* keep away from creeks and drains.
* do not drive vehicles through flooded areas.
* stay indoors if possible.
* Avoid using the phone during the storm.
* if you are outside, avoid sheltering under trees
* listen to the radio for storm updates
* switch off your computer and electrical appliances

Any of our weather friends in the western districts, please keep us updated as this system comes in from the west. Can anyone see the anvils?? Or convection out there??

Ha Mick, the weather did all the right things at the right time, that's all, i was just a witness back in March. Speaking of which, having a quick tea and then i'm off. Will be running about in western districts tonight, nothing's changed for me, will retreat back as the line moves east.

Karl Lijnders wrote:Any of our weather friends in the western districts, please keep us updated as this system comes in from the west. Can anyone see the anvils?? Or convection out there??

Can see high cloud but that's about it. Looks to be a very thin line of storms. Might not get a lot out of these but it will come down in a hurry that's for sure.

Cannot see much here either. Too much high cloud about. I am really worried that this line is splitting and will miss me by 'that much'!!!! Please don't... I am dieing for a storm!!!

some convective cloud around here mostly mid to large cumulus. One to the north is going congesteus (turkey tower). High bases. Very humid next to no wind.

One thing for sure...that line has no chance of making it here. Maybe as a decayed light rain band but thats it. I want to see convection ahead of that storm band and if they kick off this evening then it could be a goer..still hard to tell how strong this series of pre frontals are, i geuss the next few hours will tell us.

Some convection starting to happen to my west, nothing major yet, can't see the main storms, hopefully something fires before the main line to add to it.

Thats what we want lightnin..keep us posted.

The heat factor should help us a bit, the hot cold air mix will always generate quite a bit of energy...I am not that confident, it doesn't really have the real stormy feel, but this whole sequence has been very unpredictable and LI values are still pretty good... and good shear later, wait and see - we have definitely got a trigger, that is the main thing.

By the looks of things, although Adelaide was hotter than us today, it was nowhere near as humid, so guess that is a positive as well.

Only problem ILS is we dont have the upper level trigger which you need for night time activity if you want something decent.

Anthony Violi wrote:Only problem ILS is we dont have the upper level trigger which you need for night time activity if you want something decent.

Did we have that on the Friday night a few weeks ago, and did Adelaide have that today?

Convection just starting to shoot up to my east and west now. The stuff to the east looks real nice, might be something trying to develop ahead of this first line of thundertstorms!

Okay, I am going to break the silence. Still very very lightning active, precipitation spotting in front of the main line as well, LI values looks decent over Western suburbs and high temps and humidities are still present.

The shear coming in from the NE should help A LOT as well. Lets just hope it all comes together at the right time, and we don't miss out due to the absence of an upper level feature.

Hmmmm... there is a little gap in the band of storms where it has just stopped being lightning active. I hope that either it hits Warrnambool and we get the lightning still or it builds as it approaches. Otherwise its still a beauty of a line!

Some nice convection though ahead of it just starting to pop up around me. A fresh NE wind as well!

It has hit here with squawly winds and sheet lightning and heavy rain.
The anual canamaroo festival down the main street is going to be washed and blown out.

Nhill 12mm rain, 80+ kmh wind gusts, on the radar showed up as a blip! Good to see the intensity is holding thus far, nightfall coming so hopefully she can hold her ground!

I_Love_Storms wrote:Nhill 12mm rain, 80+ kmh wind gusts, on the radar showed up as a blip!

There is no radar coverage there, so it is harder for echoes to be returned.

Still looking mighty fine. Next hour or two and the thunderstorm should be here. We should start seeing some light to moderate rain in the next hour.

It is weakening up near Mildura now, this thing just has to hold intensity through central areas, I am worried it will push south a miss the city like a couple of weeks ago.